Campania is a region in the south of Italy where you can find the majestic gulf and vivacious city of Napoli, the cinematic coast line of Amalfi and the haunting Roman ruins of Pompeii and Herculaneum. It is perhaps lesser known for wine, but nonetheless superlative. Whether it is a crutch or a gift, Campania is intrinsically tied to the past and tradition, and to drink it’s wine is to travel in time all the way back to Ancient Greece. In fact, this region was part of Magna Grecia, a colonised territory of the Greeks who arrived around the 8th century BC, bringing with them many grape varietals still cultivated today. Campania has over 100 different autochthonous varietals, mostly white, which is more than any other wine producing region in the world. It is also one of the most antique wine producing regions with evidence of a thriving wine culture in the archeological sites of Pompeii and Herculaneum which date back to the 6th century BC. 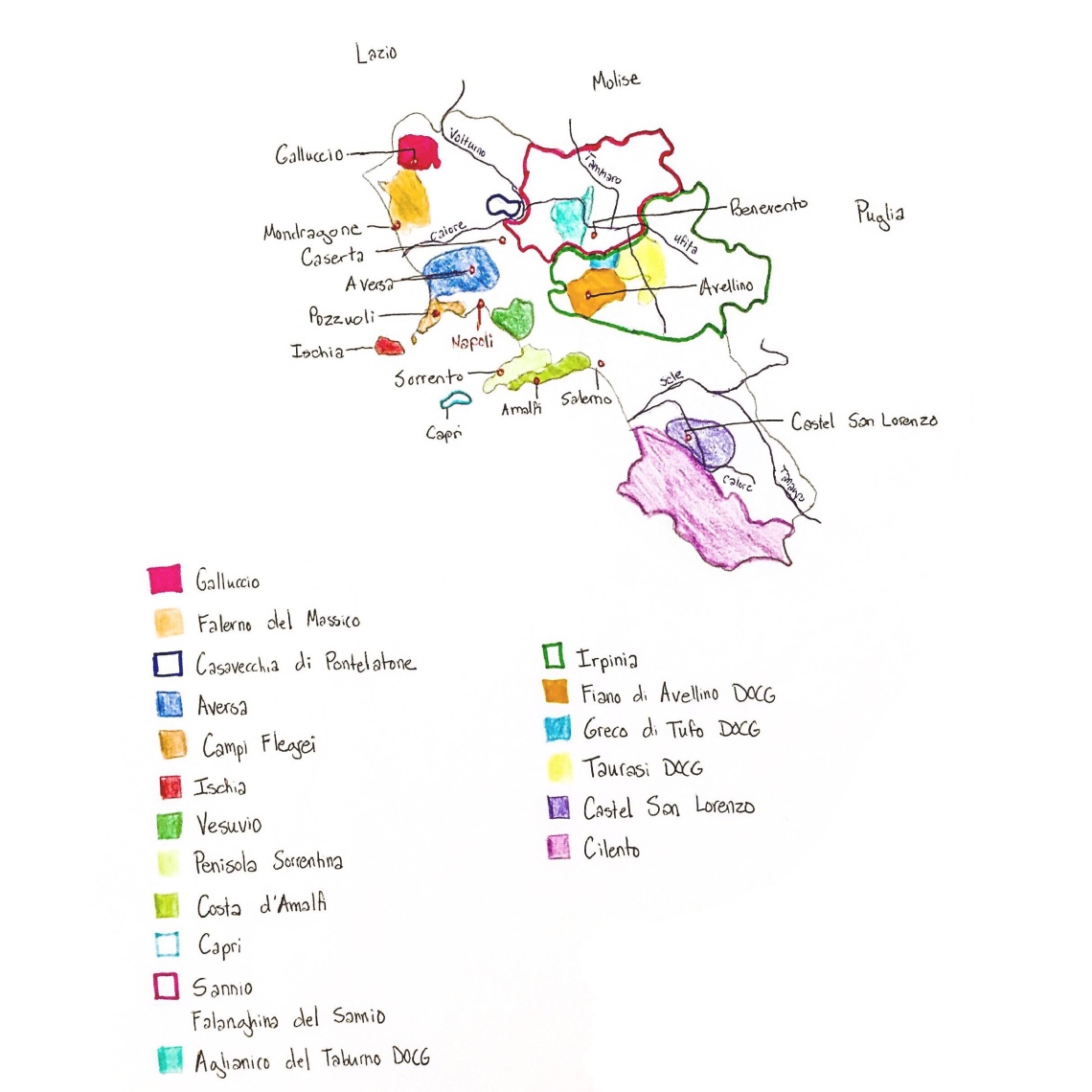 The Ancient Romans called this territory “Campania Felix”, meaning rich and fertile land, being celebrated already at the time for its fertile soils, variety in agriculture and overall quality. The territory of modern day Campania can be divided into 6 main wine producing regions: Caserta, Napoli, Irpinia, Benevento, Amalfi and Cilento. The climate is mild and ventilated along the coast and continental near the southern Apennine Mountains. The soils are mostly vulcanic due to the explosions of Mount Vesuvius which covered the surrounding limestone, marl and clay soils in layers of vulcanic ash. This led to a soil rich in minerals such as potassium which allows for excellent drainage and absorption of nutrients, giving a touch of minerality to the character of these wines.

Irpinia, in the Provence of Avellino, is historically the region that produces the highest quality, containing all 4 DOCG wines of Campania. * However, other regions are catching up with the implementation of modern techniques that still respect the patrimony of the territory. Namely Benevento, the neighbouring region with the largest production, 80% of which is DOC or DOCG.

The Amalfi Coast and Sorrento Peninsula are perhaps more known for tourism than for great wine, but in these regions you can find many rare antique varietals produced with a passion for the territory’s identity. What’s more, The rugged hill sides lined with terraces that drop straight into the sea make the cultivation of vineyards truly heroic.

Despite the wider variety of white varietals, red wines make up about 60% of the regional production. The potent and austere Aglianico is perhaps the most representative of the territory, produced mainly in Taburno in Benevento and Taurasi in Avellino. It is one of the most tanninic wines in Italy with typical aromas that range from red fruits like plum to floral notes of dried violets to spices and toasted notes of tobacco and leather. The power and complexity of these wines has led them to be known as “The Barolo of South Italy “.

Another red varietal largely produced is Piedirosso, diffused mostly in the region of Napoli. It is typically more mild than Aglianico with notes of forest fruits and cherry with delicate tannins. The wine Lacryma Christi, meaning tears of Christ, is a blend of Aglianico and Piedirosso. Legend says that on Lucifer’s descent to inferno he tore off a piece of heaven which became the gulf of Napoli. Jesus, upon seeing the beauty of the gulf, shed tears which created the vineyards in that territory.

The most cultivated white varietal is Falanghina, diffused in most of Campania, with typical notes that range from citrus and exotic fruits to white Mediterranean flowers. Greco di Tufo, produced in the region of Irpinia, owes its particularity to the rocky tuff soils which adds a spiked minerality to the fragrant white fruit and floral notes of the wine. Fiano, produced in the same region, is also noted for its elegant fragrance with typical notes of lime wood, Mediterranean flowers, white fruits and hints of almond and hazelnut.

Asparino di Aversa is another antique varietal produced in the region of Caserta. It is one of the most acidic wines in Italy and is still cultivated with the “Albarata” system used by the Etruscans. The vines are grown on vertical stocks that can reach up to 15 meters in height and are handpicked with the use of wooden step ladders.

However underrated these wines maybe, one thing is clear: The wines of Campania are a result of a keen investment in the revival of a rich heritage that takes us back to the beginning of wine production in Europe.