A vigorous, bold and rich wine with lush aromas and impactful flavours.

Food pairings: This wine requires an equally bold and rich dish that won’t be overpowered by the complexity and persistence of the wine’s aromas, as well as the structure and intensity of the wine’s flavours. The wine also has plenty of acidity, which is best balanced by fat and starch in the dish. Wild game, rich sauces and seasoned cheeses are excellent matches. Some examples include: roasted duck glazed in orange sauce, venison with potato purée, braised beef, or Gorgonzola cheese.

Speri is one of the most historic family producers in the Valpolicella Classico region, one of the first wineries to produce Amarone and a point of reference in Italian viticulture still today. The winery was born in the first half of the 800’s and has been passed down through 7 generations, maintaining a reputation for excellence and tradition while keeping up with modern innovation.

In 1974 the vineyard Monte Sant’Urbano was established as a the first Cru for Amarone at a time when this was a new concept in Italy, and is one of the most prestigious Crus of Valpolicella Classico today. Throughout the years they have developed a system of cultivation entailing an open, inclined “pergoletta”, modified from the traditional “pergoletta Veronese”. This system allows for better sun exposure and ventilation of the grapes and has become diffused in the region as the most effected for the production of Amarone. In addition, in 2015 Speri obtained organic certification for all wines they produce.

This winery has certainly played a significant role in the history of Italian wine and is an emblem of one of the greatest Italian red wines, Amarone.

Speri Amarone from the Monte Sant’Urbano Vineyards is a traditional blend of 70% Corvina Veronese and Corvinone, 25% Rondinella, and 5% Molinara. The grapes are handpicked and selected for quality before being dried on bamboo crates inside “fruttai” for about 100 days. After the grapes are dried they are pressed and fermented with maceration at low temperatures. The wine is then aged in large French oak barrels for 24 months, medium Slovenian oak barrels for an additional 18 months, and 12 months in the bottle before it is available on the market.

Great wines don’t come from nowhere, they are often the product of vision, innovation, experiment, and as is the case with Amarone, lucky accidents. Legend has it that some forgotten barrels of the sweet wine, Recioto, were discovered in which the wine had completed the fermentation process leading to a dry, “bitter “ wine with great structure. The Italian word for bitter is “amaro”, and this new discovery took on the name of Amarone to distinguish it from the sweet wine, Recioto. In fact, where as Recioto is a sweet passito wine, passito meaning produced from dried grapes, Amarone is a dry passito wine made from the same grapes. This discovery was made around 1936 and it was first bottled and sold in 1953.

The grapes selected for the production of this wine are the most loosely packed bunches with more space between individual grapes which allow for better air circulation during the drying period. These sparse grape bunches are extended on wooden crates and laid out in ventilated rooms called “fruttai” for a slow drying period that lasts between 100 and 120 days. During this period grapes loose between 30-45% of volume as the water evaporates and the sugar, phenolic components and other substances become more concentrated.

After the grapes are dried, they are pressed and fermented with maceration at a low temperature for 30-50 days. The low temperature of fermentation slows down the process, protecting the organoleptic properties, optimises the extraction of phenolic components from the grape skins, and allows all the sugar to be transformed into alcohol. Once the fermentation is complete the wine is aged in wood barrels for a minimum of 26 months.

Here is a nice summary of Amarone wines including grapes, styles, regions and production methods from Wine Folly: 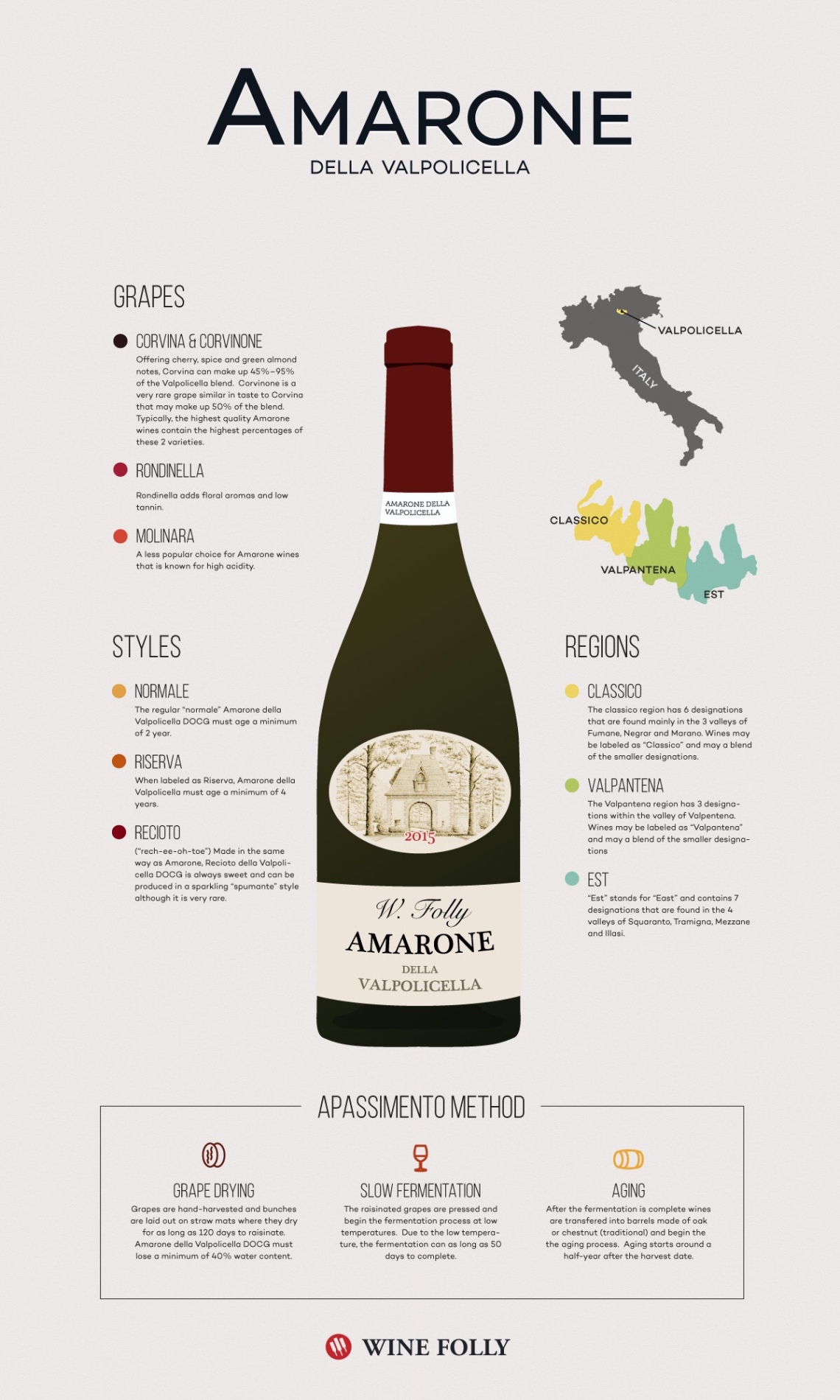